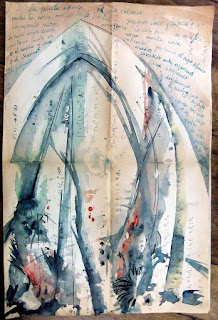 I arrived in Paris on the 16th of December 2019, in the middle of the longest transport strike of its revolutionary history. I had the pleasure of having my first fraternal experience right there in the Gare du Nord, when after waiting among dozens of people for a never coming bus and dragging my huge suitcase, I stepped on the road and stopped a taxi. A young parisienne woman immediately came along greeting the driver and asking him if she could also jump into the vehicle with me. I don’t speak french but it wasn’t difficult to understand what she meant. The driver was telling her that it was up to me, and of course, I was very happy with helping and supporting in my modest way the french resistance cause, after all it is still a remarkable example in the global struggle of our societies.
I was really excited at having ahead seven weeks of freedom in, for me, an unknown but mythical city, sheltered in a cozy sixth floor garret from where I could fly along its lighter sky and legendary roofs with the magic carpet of my writing.
I couldn’t offer a generous enough feedback about my experience there, but perhaps I should start by saying that for a fifty seven years old woman, mother of three, grandmother of two, who for the first time in her life has seven weeks just to focus in her writing, gratitude is too small a word for what I feel. I came with a long year's project that has been slowly developed among many other tasks, always lacking enough solitude to be able to finish it, so my time in Paris has been so precious that I am pretty sure I made the best of it.
I was welcomed by John Pluecker, a sweet friendly poet from Texas who had been cooking me lunch while waiting for my arrival and handing me the keys of the castle. He showed me the secrets of the lodge and the main sites of the surroundings before he parted back home.
I am not a very good friend of maps and plans for touring, and I don’t posses a smartphone as a modern compass to guide the directions of my endeavours, so, apart from a few looks at the google map overview of the city to visualize the positions of some of those places where I really wanted to go, I spent most of my daily walks wandering the back streets where the traffic was less brutal, looking up and down the magnificent very well preserved architecture of Paris. By way of the synchronicity in which I believe, I was encountered by a series of treasures left by the rubbish skips, obviously awaiting me to collect them: Books. This happened to me five times, and the most remarkable was that one that contained also three notebooks and a collection of loose sheets of paper, dating 1968, filled with the enigmatic formulas of a mathematician teaching then in La Sorbonne. Until then I had been working on a series of endlessly corrected poems that seemed to be stuck all over the desktop, but that night, fascinated by the mystery of the treasure and the old quality of the paper, I decided to watercolor them over the labyrinth of the formulas to which calligraphic riddles I added those of my words. And that broke the spell of my paralisis. 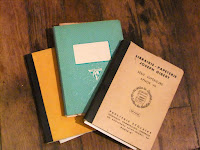 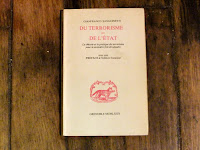 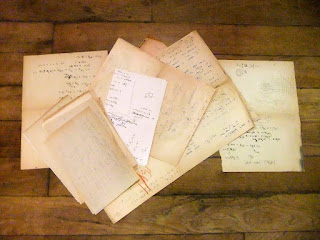 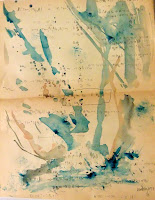 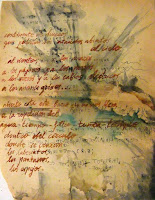 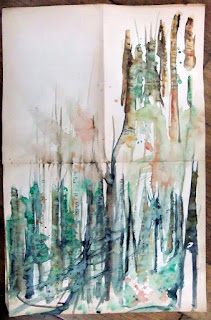 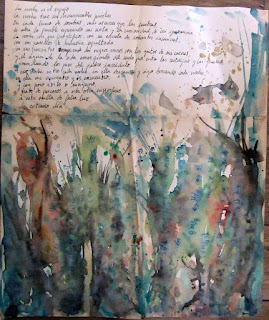 Once the Christmas madness was gone (also very happy of being completely out of its compromises), my intention had been to reach some of the poets and artists proposed by the residency and get more or less engaged in their network. But I was by then so fully immersed in the good rhythm of my writing that all of the sudden I chose to preserve this retreat and keep going rather than getting involved in more arrangements. I have been at the front of Hundred Years Gallery in London since 2011, a place where the weekly program of events, parallel to the exhibitions, keeps us extremely busy socializing with artists from all disciplines, including poetry. So this time, for a change, I needed solitude more than anything in order to make the best of my time there.

Contrary to the idea of writing in the very bohemian cafes (and due to my own humble budget), I spent most of my writing hours sitting in front of the garret’s window. I took many breaks for lunch in Les Jardins de Luxembourg, mostly when it was sunny, and many of those days wrapping myself in a blanket, holding my flask of tea, and writing my notes and new poems in my notebook while contemplating the people playing petanque, children riding ponies, the white statues, the elders doing TaiChi, the joggers, the tree tops getting their early spring aura. 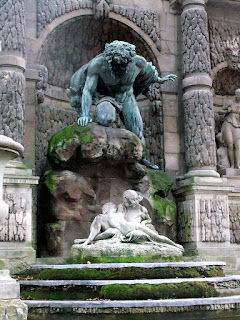 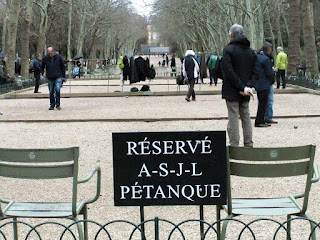 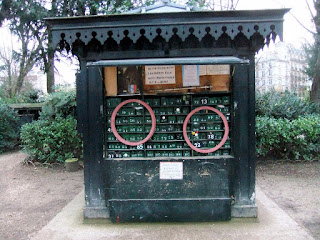 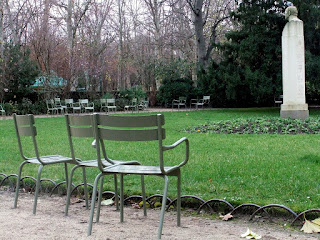 The street market in Boulevard Edgar Quinet and the Montparnasse Cemetery were my regular visit each Saturday, where I did my weekly shopping (and eventually a bit of gleaning as in Agnes Varda’s film The Gleaners and I). Then I ate my moroccan wrap lunch among the stones and graves of the many great writers, artists and bohemians of Paris, Baudelaire, Simone de Beauvoir, Sartre, Man Ray, Brancussi, Julio Cortazar, Tristan Tzara... 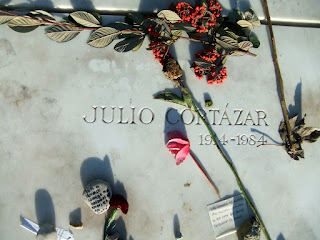 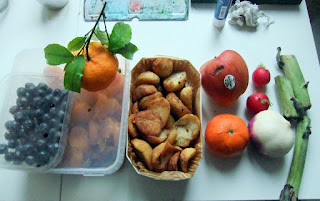 The Dubuffet Foundation, which is at ten minutes walk, was also one of those little gems I very much enjoyed visiting. I spent three hours there, contemplating his works and the corners of its beautiful run down patio and roofs, writing in complete silence (just one visitor apart from me came along) by the huge window of the main galleries. 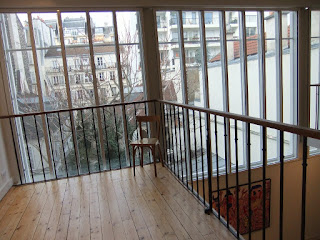 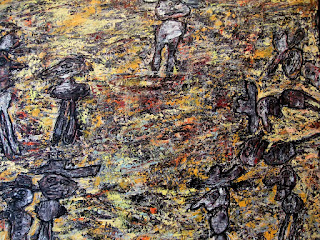 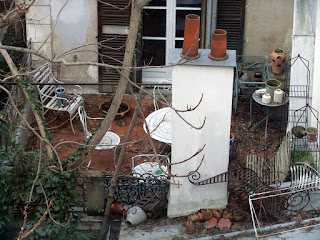 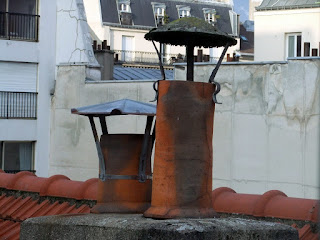 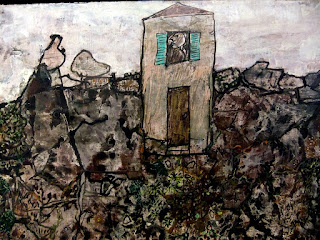 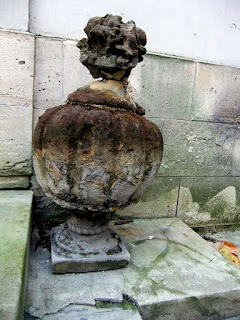 Le Jardin des Plantes was another place really worth visiting. Remembering that Julio Cortazar was inspired by one of the creatures living in a tank of its reptile house, a gecko, to create one of his unforgettable short stories, I went there twice. I walked into the greenhouses, I sat on its benches and recorded the interesting sounds coming from the zoo, something like a faked symphony of the jungle behind the green walls that I used later for one of my sound & voice poems. 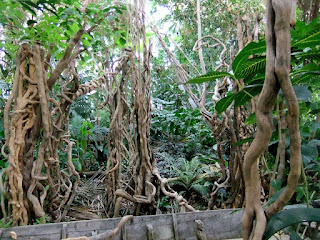 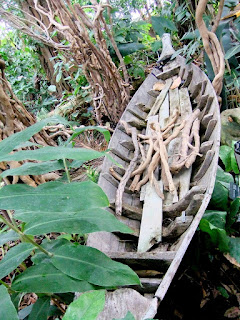 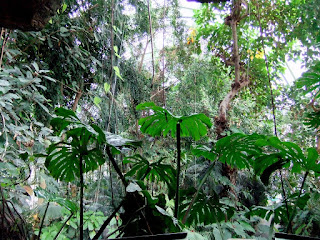 Another recommended place for peace and silence is the little romanesque chapel within the Saint- Germain-des-Prés Church. The main church is an astonishing recently renovated Gothic treasure, but the stone chapel (go through a very old door on the right side of the hall, before the glass door of the main church) was my favourite. Very warm and isolated from the noise and echoes of the busy street, in this almost bare space I sat several times to reflect on those ideas hovering my mind and eventually compose a few lines of verses.
I had many more discoverings just by way of chance during my long walks but the two that took me to the actual of the contemporary parisiennes were the regular protests that marched all over Paris. Twice I was caught by this fantastic river of people demanding to keep their rights in a very celebratory manner, singing, dancing, shouting, whistling, arms in arms one with another, not just in a pacific way, but in a truly egalitarian one. Worker unions and many other groups with different social claims of gender, race, queerness, culture, immigration, ecology, climate change...all raising the voice of the people to defend the people. The great barricades of the police, robocop type, making sure that the liberte wasn’t taken for granted. 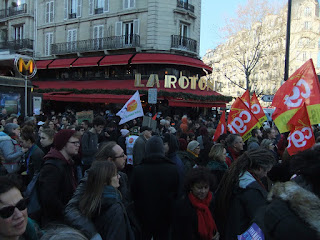 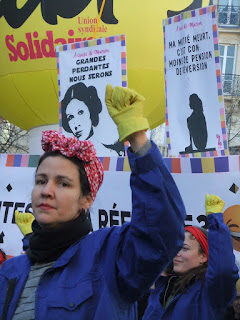 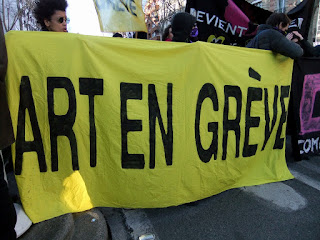 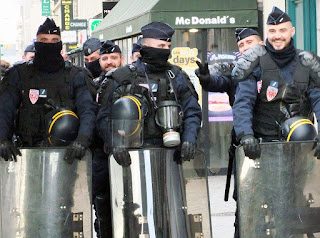 Very sadly I left Paris the 4th of February 2020, after welcoming Fahima Ife, the poet arriving from Lousianna. We had a very nice chat and a quick exchange of common ideas and places, and again, that strong and clear sense of experiencing yet another synchronicity. Very much the same I felt the day before when I met Elizabeth Hansen, our generous host, with whom during also a brief conversation, very soon I discovered that we were talking about the same life purpose, swimming the same overwhelming current. Both passed me a little torch, and perhaps and hopefully I did the same, with which to keep lighting the shadowy path of my own journey and the words I am intending to leave behind.
Thank you Elizabeth, Johnn, Fahima and all the amazing Trelex Team.
Posted by nt at 04:03 No comments:

A Trelex residency in Paris

This free poetry residency without application forms, is the continuation of an experiment started in Switzerland. It was founded and is supported by artists who believe in giving other professional artists complete creative freedom to use their time in Paris in whichever way is most productive and meaningful to their practice as poets.

A room with a view 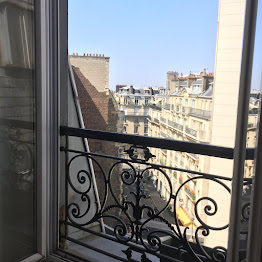 We believe that an open and free environment, supportive of artistic creativity through practical help and critical dialogue, exchange and collaboration can help any artist at any point in their career see their practice in a new light.
Any poet is welcome: please read the green links above attentively if you are interested in coming. 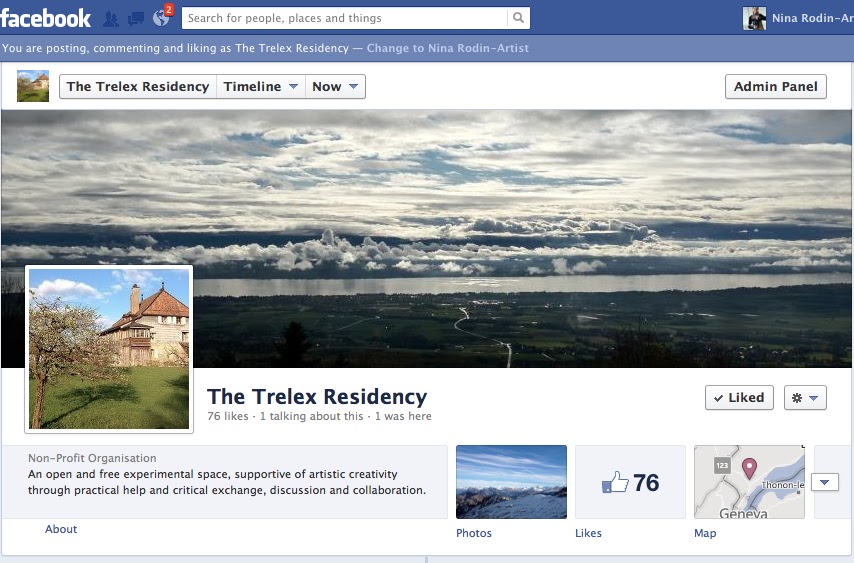